THPS HD discussions can go here, about modding, or what ever you want
Post Reply
25 posts

Ok, theres a steam-ripped THPS HD floating around, It actually has some loose config files for modding

Found some DLC string references stuff? Might mean the next DLC levels are Burnside and Philly.

i just notice some canada, la and airport txt but thats all. i see only music/video and .ini files, there is nothing to mod ?
Top

You can do a few things in the .ini files. I've adjusted my game to 852 x 480 & windowed resolution so I can do other things while it loads levels. There is a levels config file which might be neat to edit, however it seems none of the changes I make really take effect, and I have that problem with some other files too.

I'm not too sure. But the biggest help was probably the control fix one, that worked and its a lot easier to play.

The files are kinda a mystery, but here are two things that may be of interest?

http://www.mediafire.com/?flqrcosyn52l7dd
Warehouse Model? I extracted this package and it includes what seems to be meshs/textures for level. But my understanding and ability is kinda limited. Some Borderlands 3 site has some info on the sound files and provided me with some small info but that's about all I know. If someone wants to confirm this is a "model" of the level or not then let me know.

Holy shit, Robmodo is fucking lazy. This is a console port if there ever was one; where the fuck is the launcher?
Let's get someone to build a launcher, imo. It wouldn't even be that hard because all the parameters are set out in the ini.

Edit: Also, where is multiplayer?
Top

but files are compressed

i could write launcher

thpslike
uhm... robomodo fucked it up with multiplayer.. who knows why

You can enable demomode which just straight sends you into warehouse when you start up a game, you can also mess with the gravity.

There are some references to online stuff in there, including gamespy.

References to mobile phone and ipad stuff, there is even an "emulatemobilephoneonpc" setting which doesn't seem to work.

You have straight up access to some debug options, fps counter, opening levels on command.

This is one of those games that caps you at 30 fps if you are not able to run it consistently at 60 FPS, I had to change graphic some settings under system settings in THHDEngine.ini to get stuff to work.

Don't know how easy it is to repack bnk files but in the mean time change the name of WwiseDefaultBank_Audio_School2.bnk to something else to disable those goddamn constant ringing school bells (and other level specific sounds) from School II.

There's also a reference to the X360 avatar skater thingy but it's just invisible when you load that skater. 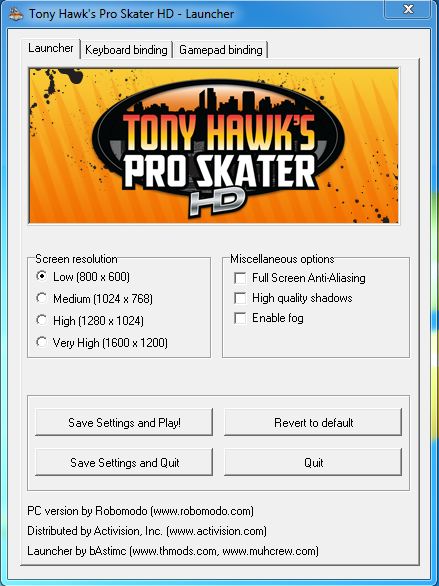 this game can be modded as well as other unreal games, look for unreal tools around. i believe there is a way to edit scripts.

files are not mystery at all, most (if not all) are defult unreal files, they didnt pack anything additionally. in most cases you can understand what is inside file by its filename. obviously THHD_<level>_*****.upk are level related files (textures, materials, meshes, maybe smth else). files like Core.upk and Engine.upk are scripts i believe. SkaterArchetypes_SF.upk - skater models and some other stuff.